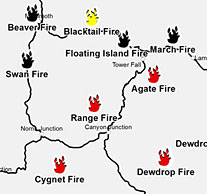 The Yellowstone volcano is still active, but according to scientist their is no sign of an eruption any time soon. The most likely activity from the volcano has been lava flows.

Landslides are not something that occur very often, however when they do it causes for the park to close that specific section. The landslides usually occur after or during a terrible storm.

There are the 1,000 to 3,000 earthquakes per year just around Yellowstone's volcano. There are also few that happen near geysers, but most earthquakes are minor, but can still cause damage.

Floods are not a huge factor that will affect Yellowstone, in the past when water levels have increased ,however, it has never reached any extreme levels. When storms get serve the park is always prepared to evacuate, but nothing like a flood has harmed Yellowstone to severely.
Graphics for this page were found at:
"LARRY'S RAMBLE." : 2011-04-24. N.p., n.d. Web. 20 Dec. 2012.