Whirling disease is caused by a parasite attacking the developing cartilage of young fish, resulting in skeletal deformities. Although the parasite may not kill the fish, the fish is unable to feed normally, which can result in starvation and eventually death. Also, the whirling behavior of an infected fish makes it more vulnerable to predators, such as lake trout. There is no treatment for this disease.

Half of Yellowstone's bison test positive for exposure to brucellosis a disease that can cause bison and domestic cattle to abort their firstborn calf. This was probably contracted from cattle raised in the park to provide milk and wheat for park visitors. The disease may be contracted by contact with infected tissues and birth fluids of infectious cattle, and bison. This is also a disease the elk in the greater stone area carry. There is a vaccine that has been shown to help the animals called RBS1.

Has been a factor in the population decline of Yellowstone wolves in both 1999 and 2005. Parvovirus is known to cause high pup mortality in domestic dogs In 1999,we documented that only 21 of 43 pups born survived, and that in 2005, only 22 of 69 pups born survived.

Mange is caused by a mite that burrows into the skin and causes uncontrolled itching that leads to hair loss and secondary skin infections. Beause mange was intentionally introduced in the early twentieth century to reduce wolf and coyote populations, the park may consider future treatment for extreme cases of infection. 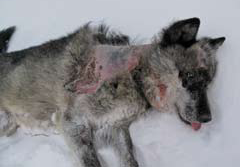 Distemper can disrupt the production of enamel on the erupting teeth of young animals, and result in discoloration,pitting, or malformations of the teeth. If it becomes severe the animal will then die because they will not be able to capture prey and eat them. 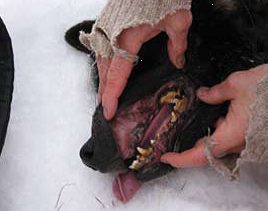